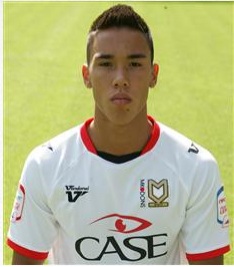 Adam Thomas Chicksen (born 27 September 1991) is an English footballer who plays for Milton Keynes Dons. Chicksen was adopted from the Philippines as a toddler.


He joined the Milton Keynes Dons Dons academy as a 14-year-old in July 2006 and was handed a two-year scholarship at the start of the 2008–09 season. He is the first, and apart from Mark Randall, only player born in Milton Keynes to play for the Dons. He attended St Paul's Catholic School.
He debuted for MK Dons first team in pre-season match against Reading in July 2007. His first league match was against Leicester City on 9 August 2008.[2]