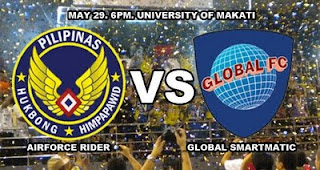 The race for the United Football League title boils down to one final game as defending champion Air Force Rider meets Global Smartmatic Sunday at the Uniiversity of Makati pitch.

Kick off is at 6 p.m. with the UFL league crown at stake. The two squads also played for the UFL LBC Cup with Global winning an enthralling final, 3-2, last January.

Air Force, with a league-leading 26 points and plus-23 goal difference, is looking to complete a sensational ride to a second straight title.

Global, on the other hand, will be seeking to punctuate its remarkable turnaround from second division titlist to top-flight champions and add to its Cup triumph earlier in the year.

Global set the stage for the final-day drama as it dismantled Navy FC, 8-0,Wednesday night at the UMak pitch, behind a hat-trick from Izo El-Habbib.

The result meant that Global moved up to 23 points in 11 matches with a plus-22 goal difference.

The Airmen only need a draw on Sunday, but a 1-0 win for Global will also be enough for them to wrest the title.

Attendance in Sunday matches has steadily risen this year and another huge crowd is expected when the league's top two teams collide.

Despite its unbeaten record, Global seemed to have faded out of the title race after a run of five draws.

During that same stretch, Air Force started picking up its game, allowing them to nearly pull away from the UFL pack.

But Global gave themselves a lifeline with a 1-0 win over Kaya Cignal Sunday where Aaron Altiche scored the goal that saved its title aspirations.

Air Force could have sealed the title earlier, but they lost to Kaya, 0-1. The Airmen came to life anew with a 6-0 drubbing of Army Fritz and Macziol IBM last Sunday.

With both squads in a rich vein of form, the final should be too close to call. Air Force and Global also played to a 1-1 draw in the first round.

Army is coming off a 3-nil win over Loyola Wednesday.