By Olmin Leyba
MANILA, Philippines - Philippine Football Federation president Nonong Araneta still onsidered 2015 a good year for the sport overall despite the Azkals’ string of losses in the Fifa World Cup qualifiers in the last quarter.
Parading a slew of high-quality recruits and returnees, the Azkals actually got off to a 2-0 start in Group H of the WCQ with victories over Bahrain and Yemen last June. This propelled Phl to its all time high of 124th in the July Fifa world rankings.
However, the Azkals went on a freefall thereafter. Although they held leader North Korea to a fighting 0-0 draw in Pyongyang, the Pinoy booters lost three matches along the way to crash out of the World Cup qualifiers with still two fixtures left in their schedule.
The Azkals, though, remain in the running for a berth to the next round of the 2019 AFC Asian Cup and they need to finish third in the group to advance.
“It’s also a good year for Philippine football. We started the World Cup qualifiers with a bang; unfortunately, we didn’t do well in the last three games. But hopefully, we can still advance to the Asian Cup Qualifiers in 2016. That’s our target now,” said Araneta.
The PFF chief expressed belief lack of “match fitness” took its toll on local-based Azkals in the October and November fixtures of the WCQ as their stints in the United Football League had long ended at the time.
“Siguro the UFL season ended too early. Nawala ng fitness ng players (The players weren’t as fit at the time of the WCQ). They ended September; nakita naman natin malayo yung fitness nila last June compared to October, November (We can see the disparity in fitness in their matches in June and in October-November),” he said.
“We’re asking the UFL to start their season in February and end in October because we’re looking forward to the Suzuki Cup by November),” he added.
http://www.philstar.com/sports/2015/12/30/1537596/twas-good-year-despite-azkals-poor-finish-pff?utm_source=twitterfeed&utm_medium=twitter
Lagt inn av jonny kl. 21:52 2 comments: 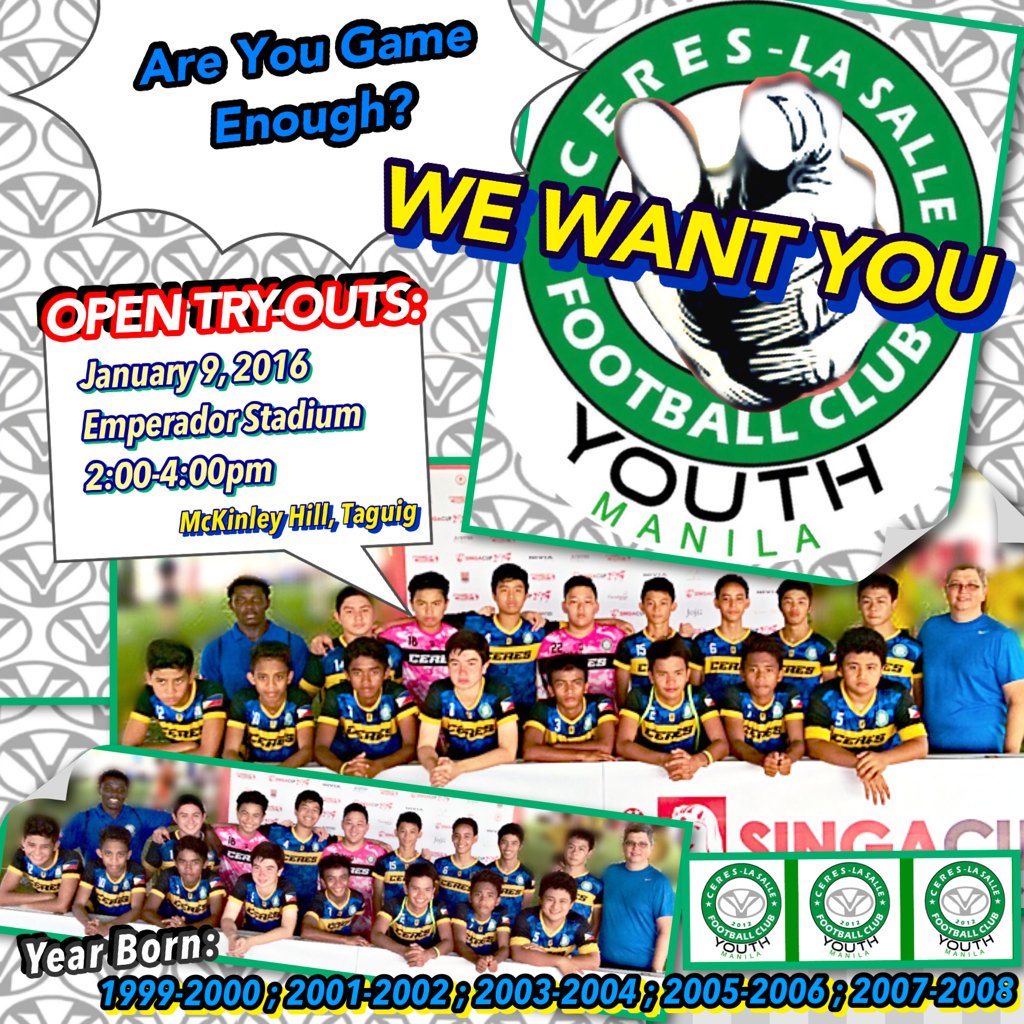 Kaya Futbol Club would like to announce more good news as the Kaya family grows bigger with the signing of Australian goalkeeper Matthew Acton, Ghanaian goalkeeper Isaac Annan, and Senegalese striker Robert Lopez Mendy.
Matthew Acton, from Thuringowa Central, Australia, played for Olympic FC before joining Kaya. He previously played for Yangon United in the Myanmar National League and became the first Australian goalkeeper to join the league. Upon his arrival, he started in all 14 of his league matches, keeping five clean sheets, and eventually helped Yangon finish second in the league. Prior to playing overseas, he spent seven years with A-League team Brisbane Roar, where he returned for a brief spell before joining Olympic FC in 2015. He also represented Australia at the U20 level.
Isaac Annan, from Accra, Ghana, established and developed his football career in Ghana, where he played for Unistar Soccer Academy, Pure Joy FC, and Charity FC, respectively. He also got called up to Ghana’s U20 team in 2010. He’s a fearless and formidable shot stopper, and we hope he can establish himself at Kaya as well.
Robert Lopez Mendy, from Dakar, Senegal, previously played for Green Archers United FC. Having scored for the Archers on numerous occasions, he helped the team reach its goals through his goal-scoring exploits and fantastic performances in the United Football League (UFL).
We would like to give a warm welcome to our new signings, who are a testament to our intentions to strengthen our squad, continue where we left off from last season, and start the year with hope and promise.
http://www.kayafc.com/kaya-signs-new-foreign-players/
Lagt inn av jonny kl. 12:05 46 comments:

MANILA, Philippines - The Alaska Football Cup has come a long way since it was launched a couple of decades ago, luring more than 6,000 players and over 400 teams when it staged its 20th edition at the Alabang Country Club recently.
Alaska Milk president and CEO Wilfred Uytengsu said it was a privilege to hold the biggest and most successful grassroots-development program on the local football scene even as he recalled the tournament’s modest start.
“In 1996, we had 350 players and 25 teams. In our 20th anniversary, we held a three-day event in 26 football fields with 6,150 players in 410 teams. In those 20 years we’ve had 12,159 teams of over 58,000 players play 13,800 games with over 40,000 goals scored. We’ve come a long way,” said Uytengsu.
The Alaska chief also cited the dedication of tournament organizer Tomas Lozano and his role not only in helping promote the tournament but also in discovering some of the best football players in the country who eventually went on to play in the Azkals national team.
“Over these 20 years we’ve also had the opportunity to have some really fantastic players participate in the event. We are proud to say that many in the ranks of the Azkals have come through the Alaska Cup, including Ali Borromeo, Roel Gener, Chieffy Caligdong and Amani Aguinaldo,” said Uytengsu.
Alaska Milk encourages sports engagement as it instills positive values during the early stages of a child’s life.
“Alaska Football Cup is more than just discovering elite players. It’s about promoting teamwork, commitment and dedication. We hope that as players you will keep those characteristics in mind. It’s a privilege to be here to open the 20th Alaska Cup,” said Uytengsu.
The AFC is the highly anticipated annual football tournament for today’s young athletes with school teams and football clubs from all over the Philippines, including Masbate, Baguio, Negros Occidental, Cebu, Davao, Palawan, Legaspi, Laguna, Batangas, Bukidnon, Zambales, Pampanga, Tarlac, Ilocos, Bicol, Romblon, Davao Sur, Compostela Valley, Quezon, Cavite, Albay, Pangasinan, Bacolod, Iloilo, Mindoro and Metro Manila participating.
For details on the AFC, visit www.alaskapowercamp.com/football; or like us on Facebookhttps://www.facebook.com/PlayPH or www.alaskamilk.com.
http://www.philstar.com/sports/2015/12/21/1534933/20th-alaska-football-cup-draws-record-field
Lagt inn av jonny kl. 12:44 3 comments:

PFF Smart U22 Qualifiers in Dipolog and Sultan Kudarat - update

PFF Smart U22 Qualifiers this weekend on Mindanao

Philippines up 3 to number 80

We are pleased to announce that the Celestial Football Club, in cooperation with Bukidnon Football Association (BUFA), will host and organized the PUMA – Celestial Invitational Football Cup 2015 on December 28, 2015 (Monday) at Camp Phillips Football Grounds.  We would like to invite you to participate on this great event.  By playing this sport, kids will enjoy the benefits of physical exercise without missing the fun while learning the life lessons about winning and losing and standing right back to try again.  The young athletes will also learn the value of discipline, develop friendships, and gain the qualities of leadership, responsibility, perseverance, teamwork and sportsmanship.

Our staff of experienced tournament organizers has dedicated themselves to ensuring and enjoyable experience for you, your kids and your team. Our goal is to host the most competitive tournament in Bukidnon. No team has the luxury to have a bad game, the competition is just tough! Let us be one world and one game play with different teams to guarantee your teams participation of the tournament, completely fill out the attached entry and registration forms on or before December 20, 2015. Walk in participants will not be entertained. We look forward to your favorable reply as you are aware of your support and cooperation is very important. There’s no better time to be part of this game than right now.

For the love of the game,

The Tampines side has impressive records winning major trophies in Singapore football, including the Singapore Cup and the S. League.

The Singaporean squad has also won the national league championship seven times; thrice in the Singapore Cup; 5 times in the S. League; and once in the ASEAN Club Championship.
The Malaysian Selangor FA is also considered the most successful club in Malaysia. It has won a record 32 Malaysia Cups, 7 Malaysia Super League titles, 2 Malaysia Premier League titles, 7 Malaysia FAM League titles, 5 FA Cups, 8 Charity Cups, 4 Malaysia President Cups, 2 Malaysia Youth League titles, and an Agong’s Cup crown.
Meanwhile, the Sheikh Jamal Dhanmondi has scored 3 titles in the Bangladesh Premier League, 3 in Bangladesh Federation Cup, and one each in the Nepal Budha Subba Gold Cup, Nepal Pokhara Cup, and Bhutan Kings Cup.
For Ceres FC mentor and director Ali Rojas Go, however, he thinks it’s a good draw for the club. “We have a big chance against the Singapore, Malaysia and Bangladesh sides. If we are 100% ready, we can beat these teams. Preparation will be the key to progress to the next stage,” he said.
On the other hand, fellow Philippine side Kaya joined Hongkong’s Kitchee, Singapore’s Balestier Khalsa, and Maldives’ New Radiant in Group F./

The Little Azkals under-13 team failed to enter the quarterfinals of the 2015 SuperMokh Cup after bowing to Japan’s Yokohama FC, 1-4, at the MSN Field in Bukita Jalil, Malaysia on Thursday.
The Philippine team, who was unable to register a win after four games, was overwhelmed by the Japanese squad during their meeting in the crossover playoff match.
The Little Azkals, composed of standouts from all over the country, bowed out of contention after losing to foes in Group D, among them Spain’s Rayo Vallecano FC, Suwon Samsung Bluewings FC of South Korea and Uzbekistan’s Bunyodkor.
In their first match, the Little Azkals took a beating from Uzbekistan’s Bunyodkor FC, 0-6, before suffering another loss to Spain’s Rayo Vallecano, 0-8.
The Philippines, in the group stage of the tournament, was again defeated in the last elimination stage match by the Bluewings of South Korea, 0-4.
Besides the Little Azkals, United Football League club Global FC’s U12 team is also representing the Philippines in the under-12 category of the tilt. The squad has been playing in Group D together with Sepahan FC of Iran, PSW Futera of Thailand, South Korea’s Haeundae FC and Bintang Biru of Malaysia.
In contrast to their older compatriots playing in the international youth tourney, Global FC is currently on top of their group with five points after a win and two draws.

Kaya will probably play at Rizal Memorial Stadium in Manila,
Ceres Fc will play at Panaad Stadium in Bacolod 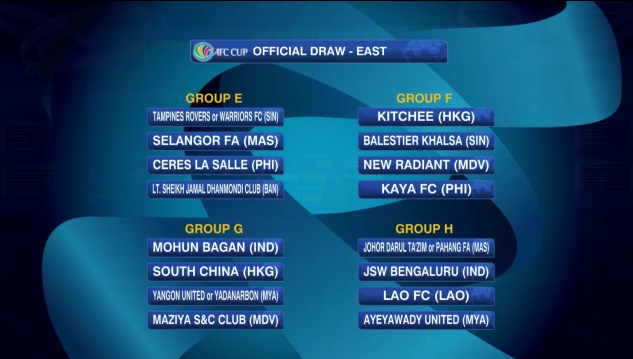 For the upcoming UFL 2016 season, AgilaMSA will be holding tryouts on Saturday (Dec 12) 7:00 am and Sunday (Dec 13) 9:00 am the Circuit Blue Pitch. We are likewise seeking outstanding local players to bolster our team for the UFL 1st division level.

Join the OPEN TRY OUTS for the MEN'S and YOUTH division on Dec. 12 & 19 at the Navy field, Fort Bonifacio, Taguig. Grab the chance to be selected and play in the UFL. Open to foreign players. Text or call if you have any question. See you!
Lagt inn av jonny kl. 20:33 3 comments:

Kuala Lumpur: The stage is set for the 2016 AFC Cup Group Stage official draw which will take place in Malaysia on December 10.
The draw will be held at the Hilton Petaling Jaya at 3pm (GMT +8) on the outskirts of Kuala Lumpur.
The Group Stage, which will kick off on February 23, will be preceded by the West Zone’s Play-off Stage which will see the matches of Al Hidd (BHR) v K-Electric (PAK), Tripoli Club (LIB) v FC Alay (KGZ), Al Wahda (SYR) v Turkmenistan’s second club (TBC) and Ahli Al Khalil (PLE) v FC Khujand (TJK). The four play-off winners will advance to the Group Stage - West Zone.
The clubs that await in the Group Stage are:

Philippines down 2 to number 139