Philippines In Group A For AFF Suzuki Cup 2020 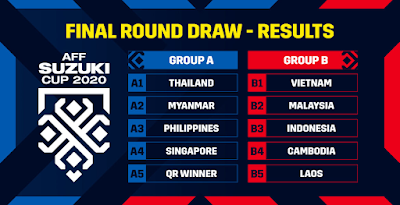 The Philippine Men’s National Team’s were drawn in Group A to familiar oppositions in the 2020 AFF Suzuki Cup following the official draw ceremony held today 21 September 2021 in Singapore.

The Azkals were drawn together with five-time champions Thailand, four-time winners Singapore, Myanmar, and the winner of the Qualifying Round between Brunei Darussalam and Timor-Leste in Group A.

Group B features defending champions Vietnam, Malaysia, Indonesia, Cambodia, and Laos. The top two teams from each group will advance to the knockout semi-finals.

“We wish the Philippine Men’s National Team all the best in the upcoming AFF Suzuki Cup 2020 later this year,” said Araneta. “It will be an interesting competition being held in the midst of the pandemic. Nonetheless, we request all Filipino football fans to rally around our team in its bid to be champion of Southeast Asia’s most prestigious football competition, which had a television audience of almost 200 million during the 2018 edition of the AFF Suzuki Cup.”