PFL: Kaya faces off with Aguilas on home field 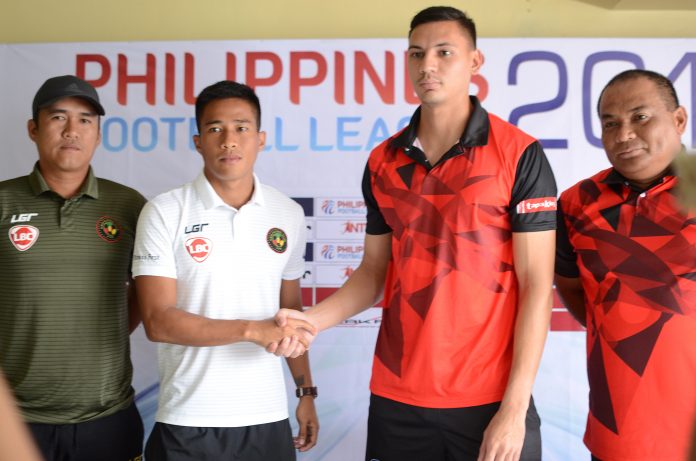 Kaya Iloilo FC defender Shirmar Felongco (2nd from left) shakes the hand of San Miguel Davao Aguilas goalkeeper Nick O'Donnell as they face the press at the Iloilo Sports Complex in La Paz, Iloilo City on Saturday, May 19 in a briefing before their 2018 Philippines Football League match Sunday, May 20. With them are Kaya head coach Noel Marcaida (leftmost) and Aguilas head coach Marlon Maro. IAN PAUL CORDERO/PN
KAYA Iloilo will finally play its first 2018 Philippines Football League match on its home field at the Iloilo Sports Complex in La Paz, Iloilo City as it plays host to San Miguel Davao Aguilas on Sunday.
Game time is 4 p.m. Kaya is on third place with 13 points on four wins, two losses and a draw while Aguilas is on second place with 14 points on four wins, two losses and two draws.
“It’s going to be a massive game for both sides,” Kaya head coach Noel Marcaida told Panay News. “It is very important for us to keep up with the league leader in the standings.”
“The result of this match will give a separation for both sides. We will defend our home turf and continue our winning streak and give that first home game to the Ilonggos,” he added.
But Kaya will have to win its first home game without Negrense defender Camelo Tacusalme, who was suspended after being slapped with a red card during their 2-0 win over Ceres Negros last week.
“Camelo is a huge loss for us because he is our main defender. But I am counting on my other players to step up and fill his shoes. It will be a total team effort,” Marcaida said.
Sunday’s game was Kaya’s much-awaited home match after its previous scheduled home game, supposedly against Global Cebu, no May 2 was cancelled due to the latter team’s unavailability.
Kaya players include Jalsor Soriano, Jayson Panhay, Janrick Soriano, Shirmar Felongco, Ref Cuaresma, Chy Villasenor, Manasari Omura, Antonio Ugarte, Kenshiro Daniels, Miguel Tanton, Mike Menzi, Alfred Osei, Robert Lopez Mendy, Dean Ebarle, Eric Giganto, Zach Banson, Marwin Angeles, Ace Villanueva, Jordan Mintah, and Connor Tacagni./PN
https://www.panaynews.net/pfl-kaya-faces-off-with-aguilas-on-home-field/
Lagt inn av jonny kl. 22:56