SHIRMAR Felongco came up with an equalizing goal as Kaya Iloilo caught up with rival Ceres Negros for a 1-1 draw in the 2018 Philippines Football League on Saturday at the Iloilo Sports Complex in Iloilo City.


Trailing 0-1 after a second half conversion by Ceres’ Mike Ott, Kaya came up with a quick response from Ilonggo Felongco with five minutes left in the match to salvage a point in the standings.
Kaya is stuck on second place with 23 points on seven wins, two draws and three losses while Ceres, the defending champion, remains on top with 29 points on nine wins, two draws and a loss.Both teams had decent attempts in the first half, with Ceres getting near goals from Stephan Schrock and Kaya having Felongco, Jovin Bedic and Marwin Angeles trying to score.
Ceres had chances to snatch the lead in the second half, including one from Schrock – he made a free kick from inside the box – but this failed to materialize. He later had another free kick but this was defended by Kaya’s Ref Cuaresma.
The Busmen finally scored in the 84th minute on a tap-in by Ott but Kaya answered a minute later when Felongco eluded the defense of Ceres’ goalkeeper Toni Doblas.
In the other match, Davao San Miguel Aguilas scored a 3-0 victory over JPV Marikina in a game at the Biñan Football Stadium in Laguna that was cut short due to heavy rain that made the field unplayable.
Phil and James Younghusband and Nathaniel Villanueva scored for Aguilas, which improved to 17 points on five wins, two draws and six losses. JPV dropped to 10 points on three wins, one draw and nine losses./PN
https://www.panaynews.net/kaya-draws-with-ceres/ 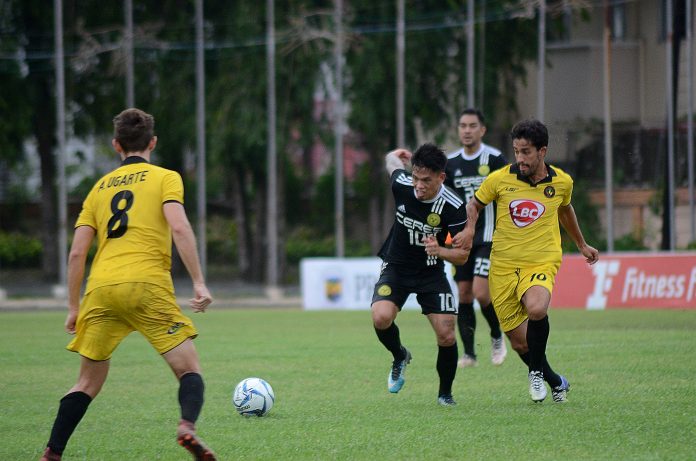